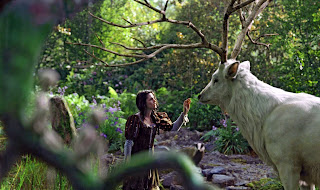 Beware: This review contains mild spoilers! - "Mild" because: Hey, it's Snow White. You know what happens. (If not, seriously consider grabbing a copy of Grimm's Fairy Tales and do some essential reading.) If you'd like to watch the movie completely uninfluenced, please stop reading right now and come back later. Ye have been warned.

Since I saw the first teaser trailer of "Snow White and the Huntsman", I was very excited about this movie - especially after the second trailer, which showed a scene where Snow White encounters mythical creatures like tiny fairies and a white stag in the forest. I'm also a big fan of Charlize Theron and couldn't wait to see her as the evil queen. Yesterday, the wait was finally over: I couldn't believe it myself when I was successful in convincing my husband to go watch this movie with me - although it really wasn't his cup of tea (he would have preferred Men in Black 3 but bent to my iron will).

Visually, the movie is stunning, even if it had a very distinct Lord of the Rings look. When Snow White, the Huntsman and the dwarves walk across a magnificent mountain landscape, the air shot looks ridiculously like The Fellowship of the Ring walking towards the mines of Moria. I wouldn't have been surprised if Legolas and Gimli had been among them. Charlize Theron, as I expected, really rocked the boat in her role, she was painfully beautiful, regal and wonderfully evil without overacting. Kristen Stewart has the perfect looks for her role, but I am not sure about her style of acting Snow White.

She was a wonderful Bella in Twilight, playing that young girl who is uncomfortable with herself and angry at the world, but in Snow White, she needed to deliver the innocence that's so important as a counterpart to the clever, scheming queen. She played the part well, but I was surprised by how few lines she had to speak, which seemed peculiar since she was the main character. Chris Hemsworth (a great actor and always a joy to look at) and the rest of the elaborate cast (it was great fun to detect the famous actors hiding beneath heavy dwarf make-up) did their best, too, but even they couldn't ensure that the viewers felt emotionally moved - which brings us to what was really lacking in this movie: A good script. 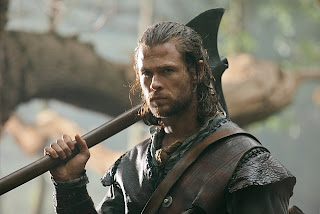 While all the elements of a fantasy story - heroes and villains, a quest, exotic landscapes and magic creatures - were there, what was lacking was: a) a good, satisfying love story (Snow White has two gorgeous guys to choose from -Thor and the handsome priest who fell in love with a mermaid from Pirates of the Caribbean 4. Hello? Where is the romance, emotional conflict, scenes that sizzle with physical tension?) and b) dialogue and characters that deeply moved the audience. Some lines were so boring and meaningless that I waited for the characters to say something else.

Here's an example: Snow White has just killed a villain who intended to rip out a vital organ from her body (slightly changed to avoid spoilers here, villain could be male or female); let's pretend for now that it's the liver.

Villain: has just delivered a very evil and hateful speech before our heroine kills her (or him) and breaks down, sputtering black blood and aging rapidly
Snow White: *watches villain with tears in her eyes* "You can't have my liver."
Me: *waits and listens*
Snow White:
Snow White:
Snow White:
Me: *waits and listens*
Me: I can't believe it. This was her final line in that scene. You can't have my liver. Wouldn't Snow White say something in addition to that line, something cool, clever, or even with a hint of black humor, to give this great villain the good-bye she (or he) deserves? What about this: "You can't have my liver - or other vital organ -, because it already belongs to the unbelievably handsome Huntsman who's madly in love with me and will be warming my bed every night while you rot in hell, you evil b*tch. (or insert suitable male cussword here) Besides, I was always more beautiful than you. You should have wiped the dust from that blind old mirror of yours before you made him choose who's the fairest. Oh, you're already dead. Good. Guard, throw her over the castle walls for the ravens to feed on." *rips crown from deceased villain's head*

And where, may I ask, was the final, passionate kiss that everyone wants to see at the end of a fairy tale? Instead, all we got was one of the male protagonists (I won't tell which one, not wanting to spoil your fun) - washed and combed for once, coming around the corner while Snow White watches him with tear-clouded eyes and a yearning look on her pretty pale face.

Me: Finally! Now grab and kiss her before you carry her to her chamber, you strong, sexy, handsome ..
Movie: *cuts to black, end credits*
Me: What the …? Are they kidding?
Husband: Let's go! *look of relief on his face* I think I need to watch a splatter movie now.
Me: I think I need to rewatch Thor now to recover from all the Chris Hemsworth lady boner teasing without results. And all three extended editions of Lord of the Rings.

If you like dark fairy tales and epic fantasy, go and watch Snow White and the Huntsman! This dark fairy tale is visually exquisite, entertaining and a good action-driven fantasy movie. What you shouldn't expect is too much depth or a romantic love story. It's one of the films that makes you think what could it have been if there had been a bit more of a background story. Now excuse me while I put on a low-cut black dress and start commanding over my own little kingdom here at home. I wanna be a badass queen, too! This makes me think of Galadriel's words in Lord of the Rings:

"In the place of a Dark Lord you would have a Queen! Not dark but beautiful and terrible as the Morn! Treacherous as the Seas! Stronger than the foundations of the Earth! All shall love me and despair!" 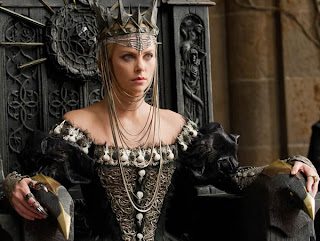 Posted by Deborah Court at 2:54 PM