Guilty Indulgence: What inspired me to write a Thorin Oakenshield fanfic

Click on the pic to read "The Prince's Secret", my Hobbit fanfic story! 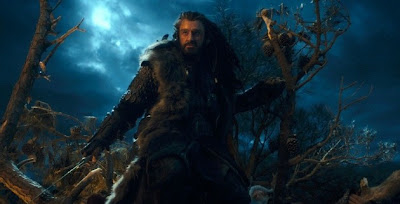 It's me, the humble writer of "The Prince's Secret". Just wanted to thank you for all that awesome support and reviews. I was amazed how many of you liked my first two chapters. Since it's not professionally edited like my other books, you'll read what I have spontaneously written, and I hope you'll forgive me the occasional small flaws. Writing fanfic is my little guilty indulgence, but it comes directly from the heart since I don't think much about plots. I just write what I feel, the kind of tale that originates from day dreams and secret fantasies. This is why I love fanfiction so much (I am also an avid reader, by the way) - it's real, uncensored, raw and wild.

The foremost reason that I felt like writing a Thorin fanfic was, of course, Richard Armitage's brilliant portrayal of Thorin Oakenshield in "The Hobbit". The powerful, dignified way this dwarf holds himself, the stunning blue eyes and dark chocolate voice doesn't fail to impress the female audience. It's amazing how RA nailed that role, despite wearing heavy make up and a prosthetic nose. However, being the romance writer that I am, I'm always looking for a love story. So after watching the movie, I decided to re-read the appendices of "The Lord of the Rings". Tolkien definitely was a romantic soul. He dedicated whole chapters to beautiful love stories (Aragorn and Arwen, Luthien and Beren), so I was very hopeful to find out more about Thorin's amorous adventures.

My pulse rapidly quickening (if I may use this highly used phrase), I opened my beloved illustrated (by Alan Lee) edition of LOTR and started to read Appendix A, III: "Durin's Folk". Very interesting, it's about the history of the dwarves, with a brief summary of what happens in "The Hobbit" (I think I'll break down in tears at the end). I even found two fascinating paragraphs about dwarf women, and I particularly liked the fact that the men were very jealous and possessive if they took a wife. It was also mentioned that many of them didn't want to marry at all, because they were, according to Tolkien, "too engrossed in their crafts" *wink, wink* (don't believe it for a second). Dis, Kili and Fili's mother and Thorin's sister, was also shortly mentioned, but not what had happened to her. I like to believe that she and her unknown husband died (probably during Smaug's attack), and that Uncle Thorin looked after them, taking their father's place.

However, this is what I finally found about Thorin Oakenshield's love life. I'm glad I wore my contact lenses - I found it in a tiny, tiny footnote after having scanned the text for the second time.

Thorin had no wife.

Say what? Are you kidding, Professor Tolkien?

I read it again, turned to the next page to see if there was more. Maybe something like:

"Thorin had no wife, for he had loved a girl in his youth, but she died under tragic circumstances. Afterwards, his heart was broken and he never loved another."

This would have made sense, at least. But simply "Thorin had no wife"? Well, let's admit that Tolkien couldn't know that in later years, Thorin would be played by "Look back at me"-Smoldering-Mr-Thornton-Shirtless-Guy-of-Gisborne Richard Armitage. I am very sure that he didn't imagine his dwarf that attractive.

Knowing the hard facts now, I couldn't help but think about this very strange sentence, turning it around and around in my mind. "Thorin had no wife." Why the heck didn't he? Wouldn't a handsome prince, the heir to the throne, have found a woman who wished to marry him? I mean, look at him!

Reasons why Thorin should have a wife (or other love interest):

1. Thorin is the king's grandson. The most important thing that dwarf must do (apart from defending his people, working as a lowly blacksmith to feed them etc. etc.) is to make sure that the line of Durin won't be broken. He must simply grab a woman, take her to his huge four-poster bed, take off his clothes to reveal that strong, brawny, chest-dusted-with-dark-hair warrior's body and cover her naked body with kisses while pleasuring her with his skillful dwarf hands before rising over her to plunge deep into …
Sorry, I got taken away. Heir. He must produce an heir (and a spare, as they say) to secure his blood line, of course.

2. He is effing handsome, intelligent, brave and loyal.

3. He has proven that he'll make a good father by caring for his nephews, Fili and Kili (as stated above). 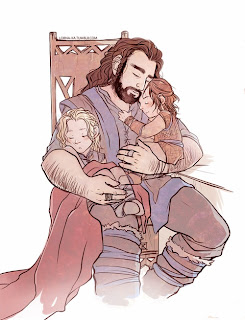 (Pic by Lornet, check out her beautiful art here)

4. He can sing sad songs about lost treasure by the fire, and play the harp. 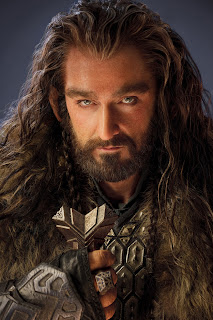 6. He might be a poor, homeless prince now, but will be filthy rich once he has defeated Smaug and reclaimed Erebor. (Not that we really care - as long as a dwarf looks so good while swinging his hammer over the anvil)

7. He can glower like no one else. Every woman should have a glowering husband. Comes in handy to scare away unwelcome salesmen from your doorstep, or the neighbor's mean dog. 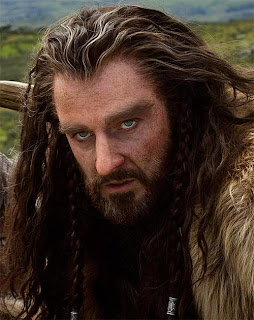 Reasons why Thorin should not have a wife (or love life, at all):

3. Well, he's busy. I mean, really busy with fighting battles, saving his people from certain death-by-incineration and leading them to the Blue Mountains to create a new life for them. But surely he could spend one night or two a week for that heir-producing I mentioned earlier? Besides, dwarves have a very long life. I guess a hundred years or more will be sufficient to enjoy one's bachelorship and settle down with wife and children, at last.

But seriously: Deep in my heart, I believe that a great man, a warrior and king who lived his whole life with so much passion, must also have had some love life. The only thing I could imagine why he didn't marry is that

a) he has loved and tragically lost a woman he loved in younger years.

b) he had a secret lady love and couldn't marry her for some reason.

c) he secretly had a faible for halflings but simply wasn't lucky enough to meet any for a very long time (this was for you Thilbo shippers out there! ;) ).

By the way, I used one of these possibilities as an inspiration for my story! But I won't tell which. ;-))

For now, farewell and thank you for reading through all of my tiresome post!

All rights to the movie, pictures, characters and books "The Hobbit" and "The Lord of the Rings" belong to their respective owners. No monetary gain for the author. This post and fanfiction was written for entertainment purposes only.

Posted by Deborah Court at 3:49 AM