if you love vampires, please head over to EricandSookieLovers.com and read my new story, "Piece of Glass".
Enjoy!

Yours truly,
Deborah
Posted by Deborah Court at 2:07 AM

Elven Lovers and Legends of the Fae 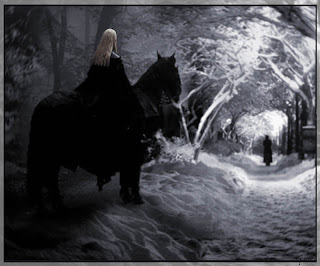 Now that the day of Samhain - or Halloween, as we call it - has passed, I like to look out of the window in the late afternoon and watch the fog rolling in over the fields. The world seems to be gently sleeping, covered in a thick white cloud of magic. Even the colors of nature look otherworldly and more intense. In those moments, I ask myself if it could be true that right now the veil between our world and that other, unknown one - the realm of the spirits - is indeed so thin that creatures we only know from old stories could cross the boundaries.
Perhaps one of them, a Fae prince, might see a human woman standing on a bridge, staring down into the swirling mist, and desire her so much that he decides to steal her from her own world and take her down to his underground lair. This is exactly what happens in my Paranormal Romance, "Bound to the Prince." But we'll come back to that a little later.
In Irish mythology, the legendary people called the Fae, or Fey, aren't strictly limited to one kind, but consist of a whole variety of magical creatures - such as elves, fairies, pixies, gnomes, giants, goblins, brownies, sprites or trolls – opinions seem to differ. Depending on their tendency towards good or evil the Fae are divided into the Seelie and Unseelie Court. The Sidhe, also called "The Good People" or "People of the Mounds", for they are supposed to live in luxurious underground palaces, seem to come closest to our understanding of elves as we know them from modern fantasy literature and movies. 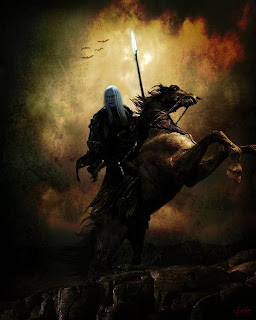 The Sidhe (pronounced '"Shee") are described as tall and handsome, they dress richly and accounts of their halls are of beautiful places abounding with delicious foods and drinks. These noble Fae descended from the Tuatha De Danann, who conquered Ireland ages ago but, after being defeated by the Milesians, retreated to their own world: underground caverns or springs and to the land of Tír na nÓg, a mythical island to the west of Ireland. Thus they became the legendary race of immortals, strong and noble but also clever and cunning. Being able to walk among humans disguised by their magic glamour, they might steal babies from their cribs and leave changelings in their places; and woe to the traveler who wandered too far into an area that belonged to the Fae! Both male and female Sidhe occasionally seduced humans and took them to their magic realm, sometimes even marrying them.
In "Bound to the Prince" I used some of the elements of Celtic mythology that inspired me, and wove them into my story. With Fearann, I wished to create a medieval fantasy world with elves who were not those ethereal beings we know from Tolkien, but warriors - strong, honorable and passionate. But when it comes to the women they love, they are as down-to-earth as the next man. However, they know how to use their magic to their advantage when they seduce a human. Being immortal has given them a lot of time to practice, after all.
Yours truly,
Deborah Court

Artwork by Gabby Leithsceal - Check out her incredible art at Deviantart or at Hidden Realm Entertainment, a petition site to bring back Prince Nuada (with an awesome trailer).
Posted by Deborah Court at 2:57 PM