Why Women fall in Love with Sherlock Holmes 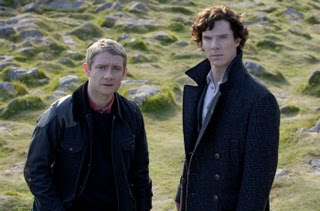 If any of you have watched the new BBC series, "Sherlock" (in the US, it's available on PBS Masterpiece), you probably have noticed Benedict Cumberbatch, the outstanding elven-faced British actor playing the consulting detective. Since the launch of the show which has, by the way, the most superb writing I've ever seen on TV, many female viewers have found themselves "Cumberbatched" - compelled by the new Holmes's dark chocolate voice and passionate, incredibly dedicated performance. Sherlock declares himself as unwilling to share any human emotions, since they would affect his highly efficient brain. I wouldn't go so far as to say that he's asexual, but he knows how to control his most primal urges, having dedicated his life to solving crimes and bringing criminals to justice.

Now have a look at Dr. Watson, Sherlock's faithful, supportive friend and flatmate at London's most famous address, 221B Baker Street. Martin Freeman brilliantly, perfectly plays him just as Doyle wrote this character - not an elderly doctor, like in the movies, but thirtysomething, intelligent, educated, brave and adventurous. Sherlock would be a boring story if we didn't see the detective mastermind's actions through Watson's eyes.

Watson - nowadays known as "John" since Holmes and Watson call each other by their given name - is a man of honor and integrity, and most of all, a romantic (as was his creator and secret impersonation, Doyle). Wouldn't he be the perfect guy to fall in love with? He's ready to give his heart to the right woman, he's faithful, intelligent (although no genius like Sherlock), brave and adventurous. You could totally imagine him doing the dishes and playing with his kids, a true family man (in Arthur Conan Doyle's original canon he marries, actually), not something one could say about Sherlock, who's a high-functioning sociopath, as he admits himself in the TV series.

But Sherlock is the one who "flicks our Bic", to quote Charlaine Harris. It has always been this way, with every actor who played Holmes, Basil Rathbone and Jeremy Brett probably the most notable among many others. I am quite sure some of them were surprised about the passionate reaction they evoked in their female viewers. But why do we find the detective so sexy when he clearly doesn't need our companionship?

If we were 14-year-old fan girls, a psychologist would say that we felt attracted to Sherlock because he doesn't threaten us with overly aggressive male sexuality (you can also apply this assumption to feminine-looking boyband members who are adored by teenage girls). Since we are adult women, however, we don't raise objections against a bit of sexual forwardness by a man whose attention we crave. So what is it that turns us on about a man who clearly denies his sexual side?

Exclusiveness, and the need to feel special. We want to be the only woman who manages to lure the detective out of his shell. We want to be Irene Adler, the near-genius female adventuress who is actually called "The Woman" by the intrigued Sherlock. Is it too foolish to imagine the wild, passionate beast we'll unleash behind the detective's cool demeanor once we managed to seduce him?

Well, a girl can always dream - even if we end up marrying the good Dr Watson and living happily ever after with him instead. Who knows, maybe there's a wild beast hidden in him, as well?


@All characters and pictures are the property of Arthur Conan Doyle, BBC and PBS Masterpiece. No copyright infringement is intended. No monetary compensation is gained. Used for entertainment purposes only.
Posted by Deborah Court at 10:14 AM