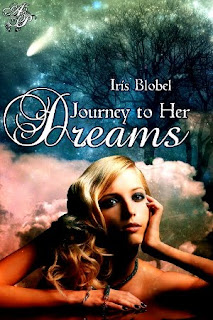 Today I have the great pleasure to welcome a friend and fellow writer, Iris Blobel, to my blog! She'll tell you how we originally met on the internet. ;-) It's a honor having you here, Iris, and thanks so much for your great guest post! *hugs*xoxoxo Deborah
****

Here’s the thing (LOL, always wanted to start a blog with these words) – I reckon, the very talented Deborah and I grew up within a vicinity of, let me guess, 200km to each other, yet we now live worlds apart. We sometimes communicate in a language which is not our native tongue. We met via a forum dedicated to the equally talented actor Luke Goss, who I like for his music in the late 80s and Deborah likes for his role in Hellboy II.

And there are people who say “Journey to Her Dreams”, where a young girl from Tasmania is travelling to Ireland to figure out her dreams, is farfetched. Go figure!

I lived in London as an “AuPair” during the days when the music by above named actor screamed out of my room or my walkman– having the time of my life. My friend then was Michaela, or Mickey to me and her friends. Not only beautiful on the outside, but beautiful on the inside as well. With her sister Anja we roamed the streets of London, danced the nights away in the “Hippodrome” (does that still exist?) and just enjoyed life. Some days better, some days not so good. I went back to live in Germany and lost track – probably my fault.

Life’s busy, right? Especially when you’re young and those days we didn’t have skype, internet or such. I moved “worlds away” and sadly years later I received the news that she had died. I cried. Silently, but for a few days. Initially sad and then I turned angry for my lack of persistence to stay in touch. But life is that way. Though much easier and better nowadays with what we’ve got, but harder with the amount of people we get to know over the internet – each person so special in their own rights, but so little time. I try my best – saying a quick FB or twitter hello. Do you?

Back to my book! Well “Journey to Her Dreams” is dedicated to Mickey. Well and truly, but I can’t really tell you too much about the “why” because I would just give it away. I wanted to have something in my life that reminded me of her, and reminds me every week of “stay in touch with Anja!”

Check out this little trailer – with Mickey! – to see what the story is all about. I hope one day you will read it and like it as much as I liked writing it!

Excerpt from "Journey to her Dreams"

“Morning, love. Another late night?” Murray handed her a coffee.
She walked over to him and gave him a kiss. “Not really, but first I couldn’t unwind, and then, well, the usual, I’d say.”
Murray watched her with some concern. “Another one of those disturbing dreams?” he asked.
Hollie sat on the chair. She nodded. “Yes. And they’re getting to me.”

There was worry in Murray’s voice. “Love, have you tried to talk to someone about it?”
“No, I haven’t. What am I supposed to say? I’m having dreams about someone being abused?”

Hollie’s bad dreams had started late the previous year. She had these odd dreams of this woman sitting in the corner of a room crying. With tears falling down her face, the woman was inconsolable, and all Hollie wanted to do was hug her. She wanted to assure her everything was going to be all right. But she couldn’t reach her. Hollie would toss and turn in bed, waking in a sweat. She knew this was more than just a dream. The aching of her body in the morning mirrored the pain she saw in the woman’s eyes. Most of the nights Hollie’s eyes burned dryly from sleeplessness, and often she kept herself awake, just wishing it would go away. Murray sat next to her and took her into his arms. Though she’d never told him the exact details of the dreams, he knew they were affecting her. Big time! She was tired and worn out by the emotional rollercoaster, but she met all his advice to see someone with a smile and an I’ll be all right attitude.
~ Amazon ~~ BookStrand ~~ All Romance Books ~~ Barnes & Noble ~~ Astraea Press ~


Born & raised in Germany I now live in Australia with my husband and my two lovely girls. I found my love for writing only a few years back. The book SDME is my little baby and the feedback from readers have been wonderful. My second book "Journey to her Dreams" was released by Astraea Press in November.

Posted by Deborah Court at 1:08 PM